A cryptanalysis of Monk S4E8, "Mr. Monk and Little Monk"

Warning! This posts contains spoilers for Monk S4E8. If you don’t want an episode of a mid-2000s comedy/police procedural to be spoiled, don’t read this! 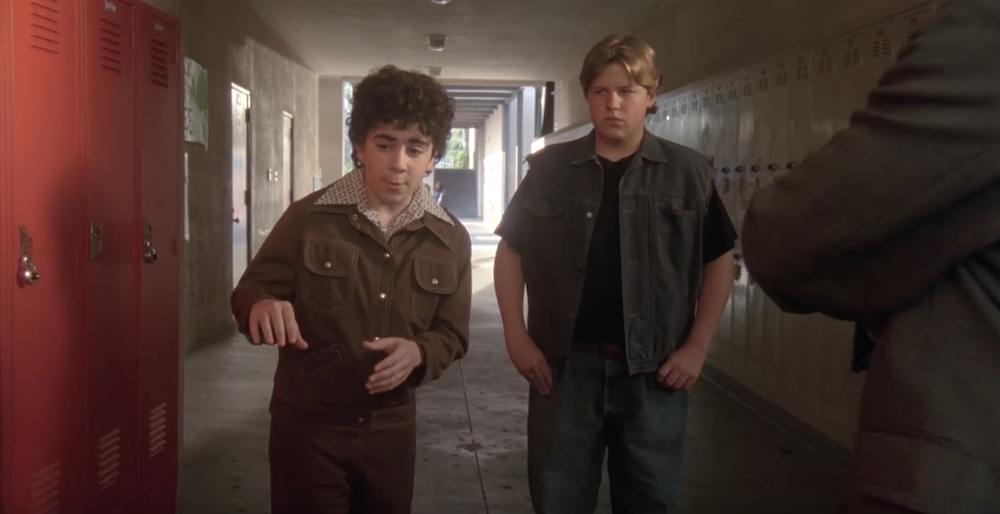 A young Mr. Monk (left) and the bully Leo (right)

I was recently watching an episode of Monk where we get some insight into Mr. Monk’s childhood. In one middle-school flashback, Leo, the local bully, executes a pretty clever sleight of hand:

I had just read Matt Blaze’s 2002 article “Cryptology and Physical Security: Rights Amplification in Master-Keyed Mechanical Locks” [pdf], which takes a cryptographer’s magnifying glass to a physical security issue. So, I wondered, is there a cryptographic analog to the above scenario? This smells like some kind of integrity protection or non-repudiation, maybe… let’s see.

The most natural comparison here is that the “locker” is protecting some secret message \(M\). Locking the locker is encryption; opening it is decryption. But this is clearly not symmetric encryption: you don’t need to know the combination to close an unlocked lock.2

Call the combination \(k_c\) and the encrypted (locked) message \(C\). To open the lock, we decrypt:

Ok, well this is just a public key cryptosystem! And this is actually a great analog: anyone (who has your public key) can lock your locker, but only you can open your locker (with your combination → private key).

where \(C’\) is the maliciously encrypted locker. (Note that this implies that Leo had read access to Sherry’s message, but not write access, which maybe breaks the analogy a little bit – but clarifies why he had to come back later to “write” the incriminating evidence. Perhaps, rather than imagining Leo performing the first swap, we imagine that Sherry locked her locker, but was tricked into using the wrong key.)

Leo comes back that night and performs the second swap, first using his own private key, then re-encrypting with Sherry’s public key.

When Sherry returns the next morning, this looks no different than if she had locked the locker herself. Incidentally, this is a convenient analogy, as well: there’s no way, in general, to tell which key was used to encrypt a given ciphertext, besides by attempting to decrypt it.3

What’s the lesson here? Don’t let anyone touch your public key! If an attacker can trick you into encrypting a message with the wrong public key, they can pull a Leo and modify your data! This isn’t necessarily an interesting conclusion but I’m glad we can draw connections between the physical and digital worlds.

Could integrity protection help? Originally, I thought not – but actually, I’d suggest this is exactly what happened in the episode.

In an authenticated encryption scheme, we encrypt our message with one key, and create a message authentication code with a second, appending it to our ciphertext.4 While this is actually meant to protect against active attackers (say, one who tries to manipulate our data while it is encrypted), it also provides us with confidence of authorship.

Granted, HMAC requires a pre-shared secret, which we’re not assuming we have in this asymmetric case. In reality, if you were able to share a secret with somebody, you would just be using symmetric encryption - there would be no reason to use asymmetric encryption and allow other people to “lock” your locker.

In the episode, however, Sherry resetting her dial to zero is in some way akin to an authentication code – where the shared secret between her and Monk is the very fact that she is doing it. This is more appropriately, I suppose, steganographic integrity protection…

Not a perfect analogy, but some fun parallels.

I’m trying to think if such a swap could even happen, and I don’t think this is a super realistic concern outside of middle school. Basically, this is a question of PKI management, rather than cryptography. (In general, we can’t stop social engineering with clever math!)